It goes without saying that cockroaches are prevalent throughout Texas, and the number of roach species and their abundance in urban areas is particularly high in the southern half of the state. This is particularly true in San Antonio where the humid subtropical climate, relatively mild winters and large human population allows cockroaches to thrive. The most common cockroach species found in San Antonio structures include German, American, Oriental, smokybrown and brown-banded cockroaches.

Last spring, a massive cockroach infestation took form in a San Antonio apartment unit inhabited by a mother and her two young children. The family of three found it impossible to eliminate the infestation on their own, and unfortunately, the property managers failed to have the pests professionally eliminated. After having no choice but to coexist with the cockroach inhabitants for several weeks, a child living in the apartment developed an ear infection after a cockroach established a harborage within the ear canal of a guest who had slept in the infested unit for only one night.

Shortly after the mother and her two children moved into Stone Oak Place Apartments, the extensive cockroach infestation became apparent. The woman quickly discovered that her neighbors were also living in roach-infested conditions, and the property managers seemed reluctant to have the pests eliminated from their units as well. Over a period of several weeks, two unskilled employees, both of whom did not possess a pest control license of any sort, sprayed insecticide in the unit on only two occasions, which failed to make a dent in the roach presence.

Numerous cockroaches had clearly been present within the unit’s wall voids, and at night, the roaches emerged through small openings and congregated on the beds of the woman and her two kids. After a one night stay, a guest at the unit developed an ear infection after a roach crawled into her ear, which required immediate medical attention. The woman’s couch became so infested with cockroaches that it had to be thrown out, and a local news team eventually reported on the infestation, but it is not known if the property managers ever hired a pest control professional to address the infested conditions.

Have you ever moved into an apartment only to find that it had already been inhabited by insect pests? 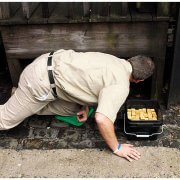 How Many Wood-Boring Carpenter Ant Species Infest Homes In San Antonio, And...
Schedule Your Free Inspection
Scroll to top