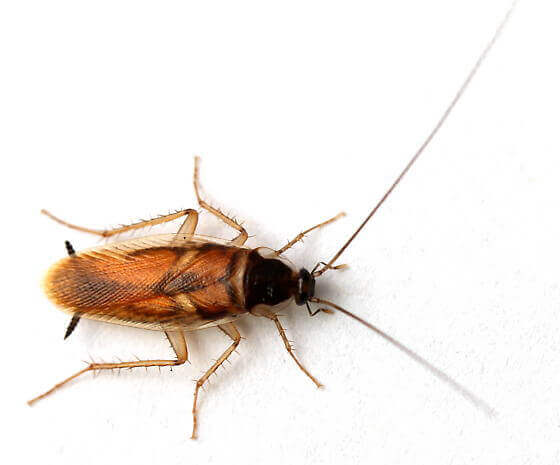 Cockroaches are among the most commonly managed insect pests within homes and buildings, and many consider them to be the most revolting insects in existence. The four most commonly encountered and widespread cockroach pest species are known as American, German, Oriental, and brown-banded cockroaches. In addition to these species, San Antonio is also home to smokybrown, Asian, Australian, and Surinam cockroach pests. With the exception of a few rare native cockroach species that are considered minor indoor pests, all cockroach pest species in the US are synanthropic, meaning they benefit from living in close association with humans.

In addition to posing a nuisance within homes, cockroach pests are covered in disease pathogens due to their preference for consuming organic waste like feces and rotting food within filthy conditions. For example, the American, Oriental and Australian cockroach species alternate between sewer and indoor habitats where they spread dozens of disease-causing microorganisms. Cockroach pests also spread allergens within homes, which has been shown to contribute to the development of asthma in children. Unlike many insect pests, cockroaches are not known for inflicting bites, but medical professionals and extension entomologists often hear of people sustaining cockroach bites within heavily infested homes.

According to Dr. Phil Nixon, extension adviser/entomologist for the University of Illinois Cooperative Extension Service, not only is it possible for cockroaches to inflict bites on human skin, but there are several documented cases describing such incidents in detail. Since cockroaches are determined to remain near humans where food and shelter are easily accessible, it is in their best interest to avoid drawing attention to themselves within homes. Because of this, cockroaches will not bite active humans, but sleeping humans is another matter.

Cockroaches emerge from their indoor hiding spots at night to seek out food, and while doing so, they sometimes crawl over sleeping humans. Their appetite for dead organic materials knows no bounds, as cockroaches are known for gnawing on eyelashes, dead skin on hands and feet, hair, and fingernails, and children seem to be their favored nighttime snack. It is highly unlikely for a cockroach to bite an open patch of skin, and if they eat eyelashes that are still attached to a person, it is likely because they are after bits of accumulated food particles. Cockroach “bite” incidents are considered out of the ordinary, but there is no easy way to know what the pests get up to when their human cohabitants are fast asleep.

Have you ever woken up at night to find a cockroach on your bed?