COVID19: Yes, we are open! See how we’re preserving the health of our customers and protecting their property.
How Many Carpenter Ant Species Can Be Found In Austin

Numerous carpenter ant species have been documented in the US, and according to a recent nationwide survey of pest management professionals, carpenter ants were the most commonly controlled ant pests in residential areas during the 2016 year. Of the 14 carpenter ant species inhabiting Texas, only three or four can be considered common indoor pests in Austin. These species include Camponotus sayi, C. vicinus, C. discolor, and C. decipiens, the last of which used to be known as C. rasilis. While the two most commonly controlled and economically costly carpenter ant pest species can be found in Texas, they are not prevalent in urban and suburban areas in the state. These two species are commonly known as the black carpenter ant (C. pennsylvanicus) and the western black carpenter ant (C. modoc), and for reasons that are not clear to experts, the former rarely infests structures in areas of Texas where they are abundant; instead, they prefer to remain within heavily forested areas.

sayi, C. discolor and C. decipiens are far more common than C. vicinus in Austin, and while these three carpenter ant pest species frequently infest homes in the city, only C. decipiens and C. discolor are known for occasionally nesting within structural wood. However, when these two carpenter ant pests do nest within woodwork, they inflict only minor damage due to the relatively small size of their colonies. While Texas sees relatively few carpenter ant infestations within structural wood, the ant pests are still difficult to eliminate from infested homes in the state because they often establish satellite nests within hidden indoor areas, such as wall voids, attics, and ceiling voids.

In order to eliminate carpenter ant infestations, all satellite nests, as well as the original outdoor nest, must be located and destroyed. Multiple control methods are required to rid homes of carpenter ant infestations, and workers are notorious for being picky about the baits they are willing to consume. Gel and granule baits specifically designed for carpenter ant control must be strategically placed throughout infested homes. To destroy nests hidden within wall voids, pest control professionals usually have to drill holes in walls in order to deliver aerosol or foam insecticide directly into nesting galleries. Carpenter ant workers can be recognized for their relatively large size, which measures between ¼ and ⅝ of an inch in length.

Have carpenter ants ever established nests within your home? 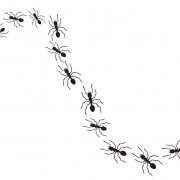 Which Potentially Dangerous Spider Species Are Commonly Managed On Residential...