COVID19: Yes, we are open! See how we’re preserving the health of our customers and protecting their property.
The Basketball-Sized Wasp Nests | Wasp Control San Antonio

The social wasps commonly known as “Mexican honey wasps” frequently build unusually large nests within trees, shrubs, and other natural structures on residential properties in southern and central Texas. These wasps, and the conspicuous nests they construct, have been known to frighten residents of San Antonio. According to Molly Keck, an integrated pest management specialist for Bexar County, she and her colleagues have received numerous calls from San Antonio residents about the sizable and spherically-shaped wasp nests that are commonly found near homes.

During 2013, a massive number of Bexar County residents contacted local authorities about the numerous and seemingly aggressive “bees” swarming around large nests located in neighborhood trees and in ornamental shrubs. Mexican honey wasps are often mistaken for honey bees, as they are one of the few insects that produce and store honey, and they are closely related to honey bees. However, the one Mexican honey wasp species known to inhabit Texas, Brachygastra mellifica, is easy to distinguish from social bee species. For example, Mexican honey wasps are relatively small at ¼ to ⅓ of an inch in length, and their largely black bodies are not covered in hairs. Although Mexican honey wasps are not as aggressive toward humans as yellow jackets, they will not hesitate to swarm and sting humans if their nest is disturbed.

Considering that Mexican honey wasp colonies consist of 18,000 or more individual wasps, their nests are naturally much larger in size than those built by most other social wasp species. Local governments in many south central Texas cities hire pest control professionals to regularly remove honey wasp nests from crops, daycares, schools and highly populated public areas. Nests are not typically noticed by residents until falling leaves reveal their presence in trees, and since nests are well hidden, humans can easily disturb the wasps by bumping into shrubs where nests are located. Trimming trees and mowing lawns near hidden nests may disturb the wasps, and tight-fitting bee suits can be penetrated by their stingers.

County officials highly recommend having nests located near the ground removed by pest management professionals in order to prevent pets, children and residents from inadvertently disturbing them. Mexican honey wasps possess barbed stingers that detach and remain in skin, resulting in prolonged envenomation. These wasps can only be found in southern and parts of central Texas.

Have you ever encountered an insect nest as large or larger than a basketball? 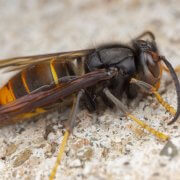 What Experts Have To Say About The Probability Of ‘Murder Hornets’ Becoming Established In San Antonio, And Which Deadly Stinging Insects Already Pose A Threat In The City
0 replies