COVID19: Yes, we are open! See how we’re preserving the health of our customers and protecting their property.
How Often Do Deadly Africanized Bees Attack San Antonio Residents On Neighborhood Properties - San Antonio & Austin Pest Control

The Africanized honey bee is an invasive insect species in the US that escaped from an apiary in Brazil during the 1950s before traveling northward where the bees eventually invaded the United States. The first Africanized honey bee colony documented within US borders was found in Hidalgo back in 1990, and since then, the invasive honey bees have been interbreeding with common European honey bees throughout the southwest. Due to 30 years of constant habitat expansion and interbreeding with common honey bees, a large proportion of wild honey bee species in the southwest are now “Africanized.”

Every year San Antonio sees multiple fatalities resulting from stings inflicted by these invasive bees, and at least one human fatality resulting from an Africanized honey bee attack has already occurred in the city this year. Last June, several landscape workers were attacked by Africanzied honey bees on a residential property in the city, resulting in one death. Within less than a month following this incident two other attacks occurred in residential areas of the city, one of which saw a victim sustain hundreds of stings, while the other victim sustained more than 1,000 stings, but miraculously, both men eventually recovered in the hospital.

Simply brushing against a bush that contains an Africanized honey bee nest, or even loud noises are enough to motivate the deadly bees into attacking humans. Loud lawn mowers and ill-advised DYI nest removal efforts on residential properties are responsible for prompting the bees to attack in many cases. Nests are often found within garages, beneath patios, hidden within foliage and even within vehicle engines and other forms of outdoor machinery. When encountering a brown or tan-colored carton nest within a human-populated area, a pest control professional should be contacted immediately for the nest’s removal.

Have you ever disturbed an insect nest of any kind? 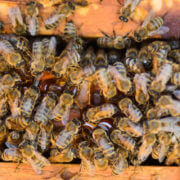 The Most Pestilential and Maddening Insect Pests Found In San Antonio During...

The Most Dangerous Arthropods That San Antonio Residents Are Most Likely To...
Schedule Your Free Inspection
Scroll to top